0
by Ian Adam in Events 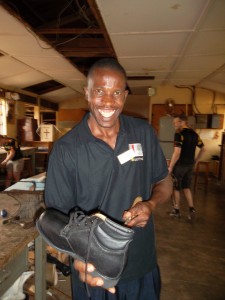 Diriibe David, one of the Ugandan technicians 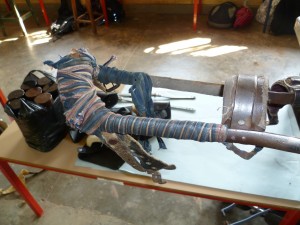 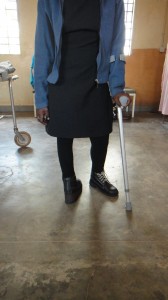 Whats wrong in this picture 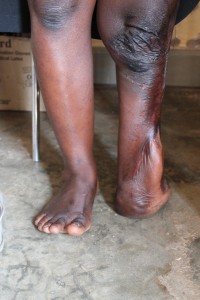 Patient who lost her foot in fire 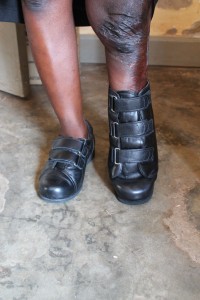 0
by Ian Adam in In the News 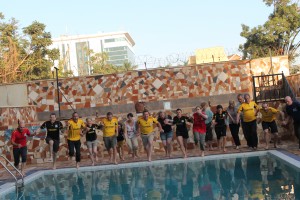 As Ian has posted previously I have recently had the good fortune to visit Uganda as part of the Uganda Polio Project team The aims of the project are two-fold. In conjunction with a group of developmental economists at the University of Nottingham, an impact evaluation is taking place to determine the effects of providing orthoses to disabled people on their income, education and employment, amongst other things. This type of study is important as it will hopefully show that there is a long-term impact of orthotic intervention and that the resources, both in terms of equipment and man-hours, are having an quantifiable effect on the lives of the disabled. This is unique to this project, as many such projects to do not have the capacity to undertake this type of analysis.

Further work has been done to transfer knowledge of the clinical and material technology skills which is equally as important as this will ensure that the local orthotic staff in Uganda receive more up to date skills and techniques to further the knowledge-base of their profession. Work is now underway to formally establish the project as a UK-registered charity and secure our links with the relevant institutions in Uganda, so that on a long-term basis the equipment and skills will continue to be channelled where most needed.

The project is now in its second year, although this is the first time I have been involved. For the first few days there I felt like a fish out of water. The vast majority of work we undertook involved conventional orthoses – something I have never manufactured in my time as an orthotic technician. Fortunately I had Paul Harris from the Nuffield Orthopaedic Centre, Oxford to guide me. After those first few days, however, I felt much happier.

Basically, the work involved drafts being taken, a “near as dammit” KAFO being found from the many UK donated goods that had been shipped over there in the weeks before. This device was then stripped and taken apart, steels and bands rebent and re-riveted, then refitted to the patient. Paul and I were the only technicians in the team of 9 orthotists, 2 physios and 1 O.T. but we were fortunate that many of the clinicians were very capable in the technical department and all of them could more than hold their own with the majority of adjustments.

Amongst the more frustrating aspects was the time spent stripping old devices before you could actually begin making the “new” KAFO. That and trying to find the tools that you had only just put down, and that someone else had picked up and walked off with!

The facilities left something to be desired too (as you would probably expect?), there was no lighting in the workshop, which was fine when the sun was shining (90% of the time), but when the clouds came over, you could barely see what you were doing. This is when everyone made for the windows to use what little light there was to carry on working. A fifth of the workshop area had no proper roofing, so when it did rain the water just came pouring through the ceiling. And let’s not even mention the toilets!

However the appreciation and sheer cheerfulness of the Ugandan staff and patients was something to behold. It is a dreary cliché, but many of the moans and worries of we have back here pale into insignificance when set against the kind of obstacles they have to contend with on a daily basis. We saw patients that crawled in on hands and knees, mothers carrying disabled teenagers into the hospital grounds across their backs. We treated over 600 patients in the 2 weeks we were there, Including many children in the last few days, who, with a vast range of issues, were helped by the team of orthotists, physios and O.T’s.

It was one of the most enjoyable, though very challenging, experiences I have ever had. I was asked in the middle of the first week if I would do it again. I said ask me again in the second week. By the beginning of the second week the answer was a resounding yes.

If any of you get the chance to go, I would highly recommend it.

Visit http://ugandapolioproject.com/ and the facebook site for more details

Many thanks to Phil for is insight to his trip, over the next view weeks we will be uploading more of his pictures from the trip. 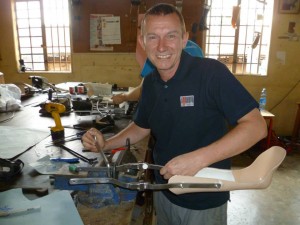 Orthotic Technician Phil Buttery from QMC in Nottingham has spent the last 14 days working with the Uganda Polo Project.  Phil has promised to give us a report for the web site on his return.  Well done to all the team on this magnificent project.