Please click on the careers tab to see the advert

0
by Ian Adam in In the News 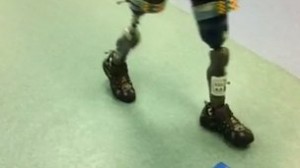 A new state-of-the-art prosthetics service for military amputees has been launched by the Scottish government.

The service provides equipment which can anticipate movements and adapt instantly, to act as close to a natural limb as possible.

It is based in Edinburgh and Glasgow, with links to the rest of the country.

Ministers were meeting with one veteran who stood on an explosive device during a tour in the Nad-E-Ali district of Afghanistan in 2010.

Steven Richardson, from East Lothian, lost his legs and some fingers on both hands in the blast.

It is estimated there are about 66 military amputees in Scotland. The rehabilitation centres in Glasgow and Edinburgh will have telehealth links to Aberdeen, Inverness and Dundee.

Visiting the Astley Ainslie Hospital Health in Edinburgh, Secretary Alex Neil said: “It is only right that our veterans, who have risked their lives for this country, receive world-class services through our NHS.

“Scotland is already leading the way in prosthetic care and this new specialist service is a fantastic example of the NHS using innovative technologies to deliver 21st Century healthcare.”

The service follows recommendations set out in a report by Dr Andrew Murrison on NHS prosthetics for veterans, particularly those from recent conflicts in Iraq and Afghanistan.

The UK government asked Dr Murrison, a Conservative MP, to review prosthetic services after concerns were raised by some charities that the NHS may not be able to provide care to the same standard as the Defence Medical Service provided by the Ministry of Defence.

Ian Waller, director of support and communications at the British Limbless Ex Service Men’s Association, said: “We are encouraged by the clear message this sends to our members in Scotland; that their needs have been recognised, considered and are being addressed.”

We have added a new job posting for a Trainee Prosthetic Technician with Blatchford in Luton.

by Ian Adam in In the News, O&P News

After Prosthetic Leg Fails, Boy Finishes Race On Marine's Back

by Ian Adam in In the News

Spectators at a children’s triathlon in Florida were brought to tears by the sight of Marines carrying a little boy with a broken prosthetic leg across the finish line.

Bone cancer-survivor Ben Baltz, 11, was participating in his third triathlon of the summer when he had an accident with his prosthetic leg Sunday during the final portion of the race.

“The screws came loose and it fell off and the Marine picked me up and he ran the rest of the way,” Ben said. “It was pretty nice.”

His mother, Kim Baltz, was waiting at the finish line and wondering where he son was when she heard the announcer say, “Turn around and look at what’s happening on the course.”

She turned around to see Ben riding on a Marine’s back, surrounded by five other Marines.

“It just made me start crying that they would have picked him up and helped him finish the race,” she said.

The Marine who carried Ben was Pfc. Matt Morgan of San Diego, Calif. Morgan, 19, has been in the Marines for a year and is based in Pensacola, Fla. A group of Marines had come to the Sea Turtle Tri to volunteer.

“I’d seen him many times in the race. He was doing very well,” Morgan said of Ben. “It came to the final leg of the race where it was a run and I was sitting at the halfway point with people that were passing out water and we were motivating some of the contestants. And as he approached the halfway point, his prosthetic failed and he fell.”

A group of Marines ran to Ben to see whether he was all right, but by the time they got to him, Ben had already jumped up and was trying to fix his leg. Morgan asked him whether he needed help.

“He said no, he’d finish by himself and he continued to try and fix his prosthetic. But after a couple seconds, he knew there was something wrong with it and he was going to need a hand,” Morgan said.

“We saw Pfc. Morgan carrying him and that’s when all the Marines lined up,” Gunnery Sgt. Wilbur Anderson, who coordinated the event, said. “We got into column of twos. I ran up to Ben and I said, ‘Hey, you’re going to be taken home by the Marines today.’ And we made it to the finish line. It was a truly moving day.

“He was going to finish the race no matter what, but I told him to jump on and we finished the race together,” Morgan said.

Capt. Frank Anderson, Morgan’s commanding officer, said he was not at all shocked by what he saw.

“I was shocked [with] the publicity, but I wasn’t surprised in Pfc. Morgan’s actions,” Anderson said. “That’s something we do as Marines. It’s that unwavering dedication to our fellow Marines and competitors in this case.”

Ben was diagnosed with bone cancer in his right leg when he was 6 and had his tibia and fibula amputated. He has different prosthetics for walking and running. The avid athlete plays soccer and basketball in addition to running, biking and swimming for triathlons. He says biking is his favorite.

“There’s no child like him [in our area], so we encourage him to participate in activities and he’s very athletic and it just doesn’t stop him,” Kim Baltz said. “He’s just your normal kid and he just happens to have a prosthetic leg.”

Baltz said Ben does not understand how much of an inspiration he is to others. He often meets with other children who are getting amputations, have gotten amputations or are preparing for chemotherapy. He brings the prosthetics that he has outgrown for them to play with and shows them how he can run with his.

“It helps to see other kids survive and make it,” Baltz said. “They realize they can have a life after cancer and after amputation.”

Ben will be reunited with the Marines who helped him out this afternoon in Pensacola.

“Pfc. Morgan did the right thing at the right time for the right reasons and accomplished a mission for himself and that young boy, Ben, so I’m happy,” Capt. Anderson said. “I’m looking forward to meeting the lion heart named Ben.”

There is a new job listing on the vacancies tab

by Ian Adam in Courses

The American web site OandP.com has launched an online learning service, this can be found by clicking here

Use the OLC Course Finder or search box to choose a course of interest. Purchase a course and complete the quiz to receive continuing education credits. Results are provided to ABC, BOC and the CBCPO. If you want you can just view the course without completing the exam and of course you will not receive any CPD credits.

These credits could of course be used as part of your CPD for HPC registration.

by Ian Adam in In the News, O&P News

I have copied this over from another O&P Forum as I believe it shows how not all Prosthetic components need to be expensive.

Hello, my name is Aden Díaz Nocera and I’m from Argentina. Here in Argentina we do not have commercial developments of upper-limb myoelectrical prosthetics, so the only way to have access to this kind of prosthesis is importing them and the prices are really high to some people. Following the idea that every people should have access to a prosthesis (or anything) that may help them, a development of a low-cost open-source upper-limb myoelectrical prosthesis has begun two and a half years ago, with the goal of share all of the technical information of this development.

During the development, a new goal came onto the workshop: to develop a Training System to train the future user of the prosthesis to have accurate control of the muscle he/she is going to use to command the prosthesis. At this time an upper-limb (over the elbow) myoelectrical prosthesis has been developed. This prosthesis (called EMP ElectroMyoProthesis) has six grades of freedom with servos: one for each finger and one for the elbow.

Also the Training System is working. This system is a software developed in LabView reads the myoelectrical signal which is already amplified and filtered, from the serial port, plot it in a graph and moves a 3D model of an arm on the screen when the signal amplitude is over an edge set by the user.

In this website: www.lifesi.com.ar you will have access to the technical information of the developments, including the code of the Training System. I hope this will be helpful. “Medicine and Bioengineering progress could be consider real achievements for Humanity only when every people have access to its benefits and stop being a privilege for minorities.” – René Favaloro (Argentinian Medical Doctor)