Like most dog owners, Kris Dexter thinks her dog is pretty special.

But aside from the Golden Labrador’s great demeanor and beautiful coat, Missy has a bit more going on in her life.

“We call them her shoes,” Dexter said, holding up one of the custom orthotic leg braces Missy wears on her back legs. The braces, which look a bit like a walking cast a person would wear, were custom made for Missy. The dog has common calcaneal tendon degeneration in her hind legs. 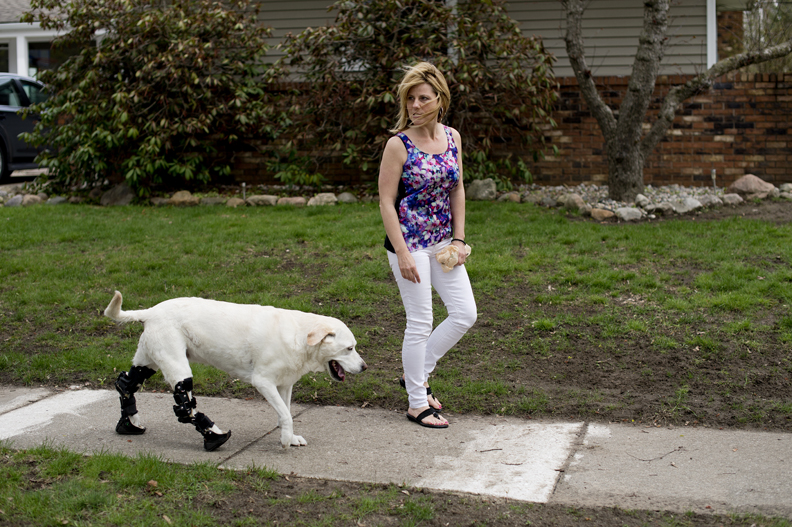 “Her Achilles tendons are bad in her back legs,” Dexter said. “For most dogs that have this, only one leg is affected. Unfortunately, Missy has it in both of her hind legs.”

Missy has trouble standing and when she manages to get to all fours, she is not very steady. Walking is difficult for her, and Dexter said she can stumble and fall, something that keyed the family off that something was wrong with their furry friend.

“One day she just wasn’t walking right and I thought it was hip dysplasia, which is common in Labs,” Dexter said. “So I got her over to Dr. White right away.”

In 2012, Missy was diagnosed with her condition, along with the news surgery would not help her.

Dr. Dan White, of Animal Medical Center of Midland, is Missy’s primary veterinarian. When he saw the condition ravaging Missy’s legs, he referred her to the Michigan State University Veterinary Clinic. The staff at MSU told Dexter Missy was a good candidate for orthotics and from there, Dexter reached out to OrthoPets in Denver, Colo.

“Missy was Dr. White’s first orthotics patient,” Dexter said. Dr. White took the time to work with OrthoPets to properly cast Missy’s legs and get her ready for her new orthotics.

There was a learning curve for Missy at first, but she has certainly got the feel of her new shoes.

“When we first put them on, she stumbled a lot. I thought, ‘How are we ever going to do this?’” Dexter said. But it didn’t take Missy too long to adapt to her new augmentations and now the dog gets quite excited when asked, “Do you want to put your shoes on?”

OrthoPets, the designer and manufacturer of the devices worn by Missy, started in 2003 when Martin Kaufmann tried to find a way to help the pet of a family member avoid an amputation. With a background in human orthotics and prosthetics, Kaufmann designed a device for the animal with great success. Later, Kaufmann began to apply his talents to the world of animal medicine.

“All of our products are made right here in Denver, and we ship them all over the world,” said Silver Stebbins, certified veterinary technician and case manager for OrthoPets.

Stebbins said all of the devices are custom made, something that requires vets to cast molds of the limb that needs attention. She said the need for such devices continues to grow around the world, and the range of animals helped with the devices is increasing as well.

“Martin (Kaufmann) has made orthotics for a chimpanzee and even horses,” Stebbins said. “One of the coolest uses of a device was on a sandhill crane in Canada. It now has a prosthetic leg and is doing great.”

But there is more to helping an animal than just fitting it with a device.

“We definitely recommend rehabilitation with our products,” Stebbins said. “The devices are not magical. The animals need to do the work (exercise) to get the benefit of the device, just as a human being would need to be rehabilitated.”

Missy is in just such a program. Dr. Tari Kern of Pawsitive Steps Rehabilitation & Therapy for Pets in Rochester Hills (www.pawsitivestepsrehab.com) offers services to help ailing and aging pets.

“Missy is a great dog. She is just so happy to be up on her legs walking,” Kern said of her patient. Kern’s practice is unique in that it deals specifically with the rehabilitation of pets, and her facility is one of only three in the state that deals exclusively in that field. Through many different avenues of therapy, including acupuncture, massage, thermotherapy and hydrotherapy, Kern and her team do their best to bring injured or aging animals back to their full potentials. Missy has gone through acupuncture and hydrotherapy while in Dr. Kern’s care.

Kern said animals seem to roll right along with the punches life throws at them.

“With an animal, if they lose mobility, they don’t seem to mourn it,” Kern said. “They just adapt and find new ways to move or live.” It is this tactic that makes orthotics or other adaptive devices work so well for many animals.

Kern said one of the hardest parts of her job is finding out where an animal is hurting.

“They can’t tell you what is hurting, and they are the masters of hiding their discomfort,” she said. She went on to say that signs of injury or pain, like a favored limb or lack of normal physical behaviors, are good signs that a pet may be in pain.

Missy can walk just about anywhere with her orthotics, even in snow and in water. “She loves to go swimming,” Dexter said. Since she has become used to her orthotics, Missy goes on about three walks a day.

“We have a great neighborhood. She knows all the neighbors and they all have treats for her,” Dexter said with a laugh. “She is a very social girl.”

Neighbor Ed Stapish is always in his yard when Missy stops by for a visit.

“Did you know this dog can do arithmetic?” he asked. Stapish asked Missy if she can add two and two.

“OK Missy, what is two divided by one,” he asked the dog, who stared at him intently, her head cocked to one side.

“We are working on fractions next,” Stapish said as he tossed a treat to Missy. “She is one smart dog.”

When Dexter and her family are working or away, Missy is in the good hands of neighbor and surrogate mom Diane Stewart.

“Diane is Missy’s second mother,” Dexter said. “We could not make it without her.”

Like most pet owners, Dexter said the animal in her charge has become a member of the family, and they wanted Missy to be as happy and healthy as they could make her.

“She is the only dog in Midland that I know of that has orthotics,” Dexter said. “People have asked me if this is worth all of the trouble. These orthotics allow her to have quality of life, and that is what matters to me.”

This entry was posted by Ian Adam on May 21, 2014 at 7:27 pm, and is filed under In the News, O&P News. Follow any responses to this post through RSS 2.0.Both comments and pings are currently closed.